When Steve Kirby formed his private equity firm, Bluestem Capital, back in 1996, one aspect of the business was crucial—the people.

While their commitment to working with good people is paramount, it’s certainly not the only consideration for Bluestem, which Kirby refers to as a patient private equity company.

“When you’re handling other people’s money, you’re set to the highest standard,” Kirby said. “We take things very seriously, and at the end of it all, our approach is simply to execute our fiduciary duty to our investors.”

According to Kirby, Bluestem approaches each deal conservatively, taking minimal risks. Since 1996, the firm has raised 22 funds and administered 111 deals.

“We don’t need to take the risks that you see people in our industry who are venture capitalists going for,” he said. “We have happy investors because we watch every dollar and take good care of their returns.”

Bluestem’s team of eight offers more than 85 years of collective experience, and Kirby says the relationships and connections his partners build have led to their nearly 800 investor entities.

So, what does it take to gain Bluestem’s attention?

“You need to have a proven and successful track record in the business you’re asking us to invest in,” Kirby said.

He offered the example of a retail company that approached Bluestem with its business plan several years ago.

“We initially said, ‘No,’ and when they asked why, we said, ‘You don’t have a track record,'” Kirby said.

But that wasn’t the end of the story.

11 months later, the company approached Bluestem again, this time with a brick and mortar location. They received the funding.

So, while the firm is strict with its criteria, it doesn’t turn companies away lightly.

“Just because we said no in September, it doesn’t mean we won’t say yes in March, for example,” Kirby said.

As aforementioned, a management team that exemplifies integrity and a strong work ethic paired with a proven track record of success and market barriers to entry are the two key criteria for Bluestem’s involvement in a company. 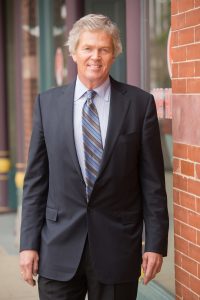 Beyond those initial qualifiers, however, Bluestem likes to work with companies in the midst of steady growth. Kirby says they generally have a bias against pre-startups or startups, but early-stage companies aren’t completely out of the question.

The team at Bluestem aims to invest only in industries where they have a firm level of experience and understanding. Their portfolio features companies engaged in business services, natural resources, medical, real estate, and manufacturing.

And while some firms have a focus on a specific state or region, Bluestem’s investments are not strictly local.

Though its office sits in the heart of downtown Sioux Falls, the firm has invested in companies not only across the state—from Madison to Freeman to Watertown—but across the country as well. According to Kirby, if it’s a good idea, location doesn’t matter.

“There are no standard operating procedures when it comes to our process,” Kirby said. “We let everything take its course, as long as those criteria are met.”

Kirby encourages companies that feel they may be a good fit to begin a dialogue with Bluestem. This starts with providing a deck of information on their idea or product and the scope of their company. Kirby says this allows them to begin getting to know one another.

“If there’s something there, we begin that dialogue. We digest it, react to it, dig into it, begin to understand it, and see if it goes down the road closer to investing,” Kirby said.

Kirby emphasizes patience as a hallmark of Bluestem’s investment strategy. If a relationship leads to funding, it can look different for every company. Typically, however, investments range between $500,000 and $3 million.

“We’ve invested small amounts that can grow up to tens of millions of dollars, over a period of time,” he said. “You never know how it’s going to go. You just get up every day and do what you need to do, and the questions will be answered for you.”