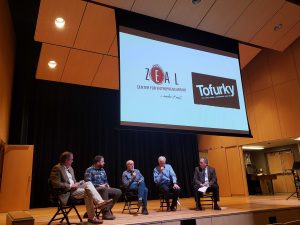 The event, which took place on Augustana University’s campus, was titled “Riding the Protein Highway: a Plant-Based Panel Discussion.”

Tibbott was also the featured speaker at the morning’s 1 Million Cups event at the Museum of Visual Materials.

The discussion was moderated by Kevin Kephart, Ph.D., a board member of South Dakota Biotech, and included Tibbott, Patrick Sayler of The Co-op Natural Foods, Kurt Loudenback of Grand Prairie Foods, and Phil Kerr of Prairie Aquatech.

Tibbott started his company in 1980 with little business background but a passion for tempeh—a fermented soy product similar to tofu but with higher protein content. Today, the company sells a variety of plant-based protein options, including the classic Tofurky holiday roast, burgers, sausages, and deli slices. View a full product list here.

Sioux Falls’ connection to Tofurky began recently when Kurt Loudenback, founder of Grand Prairie Foods, partnered with the company to produce its plant-based pockets. The product is best described as a stuffed sandwich, and it’s processed using Grand Prairie’s signature co-extrusion technology which allows dough to be injected with various fillings.

“We like dealing with new and innovative items that create a lot of buzz with consumers,” Loudenback said. “The plant-based trend is growing at roughly five to six times the rate of food demand. We’d been keeping our eye on this category, and we saw it as a real growth opportunity for our business.”

Panelists spent a significant portion of the discussion covering the rapid growth of the plant-based protein. Though it may seem like a trend, the conclusion was that it’s not going away.

“This is a real opportunity for the mainstreaming of plant-based foods,” Tibbott said. “The signs are everywhere with fast food places trying to get vegan and plant-based foods. The demand is here.”

Tibbott also emphasized the opportunity in terms of business.

“People who jump on this now position themselves to be leaders in the field,” he said. “It’s a great time to be an entrepreneur.”

For the business community in Sioux Falls, it’s critical to pay attention to rapidly growing industries with the power to create a positive impact on health, economics, or the environment.

“We hope to host many more discussions surrounding growing industries that will spark the minds and hearts of entrepreneurs in our area, as the innovations we implement today will affect generations ahead,” said Zeal’s executive director, Brienne Maner.

“We appreciated the panelists driving diverse, impassioned and candid conversation surrounding the plant-based protein industry, as well as those in the community who engaged with us: POET, Governor’s Office of Economic Development, SD Biotech Association, and Augustana University President Stephanie Herseth Sandlin. 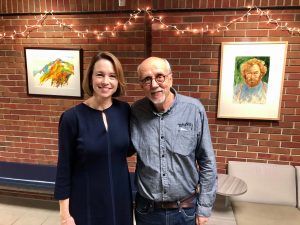 Regardless of subject matter complexity or personal opinion, it’s important that we continue to engage with one another for our city and our state’s economic health,” Maner continued.

What’s the significance of plant-based protein?

Much of the discussion centered on the effects of transitioning, even partially, to a plant-based diet on both the economy and the environment.

According to Kerr, there has never been a more critical time to understand the importance of protein in all of its sources. As the globe’s population continues to rise along with its standard of living, protein will be in more demand than ever before.

Beyond the economic demand, transitioning to plant-based protein would have a clear environmental effect as well.

Furthering the consumption of plant-based protein has the power to diminish these issues.

Sayler, who is the general manager at The Co-op Natural Foods, says in the last 4 years since he’s been working there, the demand for plant-based protein has risen significantly.

When it comes to normalizing it as an alternative to animal-based protein, Sayler says he’s noticed a shift, even in the simple act of merchandising.

“Stores are starting to stock those alternatives in the same section as the meat, which would have been unheard of before. It would have been in the produce section,” he said.

Panelists agreed that we are still at the beginning of a long journey forward. Tibbott noted that the industry is still quite young, with the vegan cheese market, for example, just around 25 years old.

As a young industry, it’s important to remember that there will be plenty of change ahead. Elements like taste, texture, and an overall variety of products are only going to improve, says Tibbott.

“The most important thing for an entrepreneur is that they need to have a vision for the future,” Tibbott said. “We get the dream that we prepare for, and this is a rewarding industry on so many levels, from creating a livelihood to doing something good for the planet, for animals, and for people’s health. If you look back when you get to my age, you’re not going to be sad that you went into this field.”