Home to the University of South Dakota’s graduate program in biomedical engineering, the Graduate Education and Applied Research (GEAR) Center provides students and startups with a state-of-the-art facility for research and collaboration. 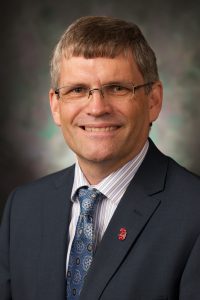 The university’s biomedical engineering program began in 2006, and it moved into the GEAR Center facility within the USD Discovery District in 2009. Daniel Engebretson, Ph.D. heads up the program as department chair, in addition to managing the GEAR Center’s biotechnology and medical technology incubator.

“What really drives me is working to change the economy of South Dakota, and I think the more diverse the economy is, the better,” Engebretson said. “Through the work of the biomedical engineering department, we’ve helped to shape the emerging medical device and biotechnology space here.”

Where academia and industry collide

Collaboration has always been the GEAR Center’s goal. The layout of the building was intentionally designed to host the biomedical engineering department on its second floor, while the biotechnology and medical technology incubator lives on the first floor.

Today, those lines are somewhat blurred as the GEAR Center finds itself challenged from the standpoint of square footage. Startups have moved in and expanded beyond the original incubator space—a challenge Engebretson says they’re happy to be facing.

“As things have grown, we’ve just made it work,” he said.

Though it has required some flexibility as far as layout and planning, this growth has proved the value of a space where startups can access equipment, resources, and knowledge they may not have been able to otherwise. The GEAR Center has seen several startup companies grow successfully within its walls—some developed by graduate students and others by entrepreneurs.

Those companies include Antimicrobial Materials Inc., Alumend, and Tailored Medical Devices, among others. In addition to those housed out of the GEAR Center, other local companies, such as Raven and Inanovate, have utilized the equipment and lab space for their own research and projects.

The GEAR Center’s resources include key pieces of equipment such as atomic force microscopes, electron microscopes, and optical microscopes, as well as a micro-CT which functions as a smaller version of the 3D imaging equipment hospitals use for CT or CAT scans. 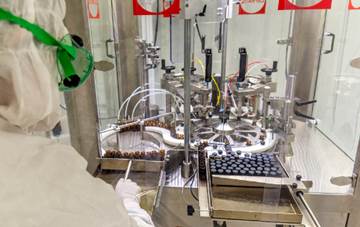 One of the GEAR Center’s more unique resources is its current Good Manufacturing Practices (cGMP), which are not only standard but aseptic, meaning the products developed in its facility are approved for use within the human body.

“We’ve got around $4 million worth of tools that the companies here leverage, as well as other companies in the area,” Engebretson said. “The benefit of academia is having nice grant mechanisms available to purchase that equipment. Small businesses don’t usually have $4 million lying around, so we can be a good hub, in that way, to support the emerging economy.”

The emerging economy Engebretson is referring to is that of biomedical materials and devices.

According to Engebretson, the biomedical space is growing rapidly in South Dakota. USD launched its bachelor’s degree program in biomedical engineering this year, and Engebretson says he hoped to enroll about six students in the introductory course. He got 21.

“When you look at South Dakota as a whole, from Sanford to Avera to Rapid City Regional, that’s a huge number of employees in the healthcare industry,” he said. “Now, let’s support that by developing the devices and drugs that go along with it.”

Though it’s still a small segment of the current economy, the jobs being produced in the biotech and biomedical space pay well, and Engebretson says they have the potential to create a much broader workforce.

“When you look at taking a medical device to market, everyone sees the science and engineering part of that, but what they don’t often appreciate is the regulatory perspective,” Engebretson said.

Work related to policy and regulation will make up a large portion of the industry’s supporting careers.

“You’re not going to make a dime if Medicare won’t pay for it,” Engebretson said. “If you’re interested in the industry, it will support people with a sound background in political science or public policy.”

Additionally, Engebretson highlights the psychological side of producing medical devices, including human factors analysis to see how the technology interfaces with people.

“What we physically do in the GEAR Center is science and engineering, but as we watch this medical device economy emerge and grow, a whole ring of other skills and services will be needed that you wouldn’t think about,” he said. “In the long term, this industry can have a really profound impact.”

It’s an impact that the students, professors, researchers, and entrepreneurs over at the GEAR Center are working toward every day.