An annual contest that gives aspiring entrepreneurs a chance to jump-start their business ideas is accepting applications from now until mid-February.

South Dakota Giant Vision is hosted by the state’s Chamber of Commerce, and it features two separate competitions—one for students and one for businesses. The idea for the competition came about in 2005, as the Chamber evaluated its economic development efforts.

“We decided that the Chamber, while being a good policy advocate, wasn’t really engaged in economic development,” said David Owen, Chamber president. “We wanted to keep the South Dakota business environment investment-worthy, but we needed to step into that arena without duplicating the efforts of the Governor’s Office of Economic Development.”

The Chamber concluded that the state didn’t have any entrepreneurship competitions at the time, and they approached Governor Mike Rounds with the idea for South Dakota Giant Vision. According to Owen, Governor Rounds loved the idea and offered to match around $20,000 in funding for the competition, which the Chamber was able to raise in one week.

Mary Anne Boyd is the Chamber’s vice-president of program services, and she’s been in charge of the Giant Vision program since the beginning.

“It’s an excellent opportunity that was designed for the citizens and students of South Dakota, and the opportunity is for those with an entrepreneurial spirit to refine their plan or go through the exercise of making the business plan,” Boyd said.

While other pitch competitions have emerged across the state since Giant Vision’s inception, Owen and Boyd believe theirs is on a higher level.

“It’s fair to say that this is one step above the other business idea competitions you see around the state,” Owen said. “This is for people who have actually thought through their plans. They don’t have to have executed those plans, but if they’re going to make it through the qualifying round, they need some some logical sense of financial projections, a management structure, and talent identification.”

The ultimate purpose of the competition is to support early-stage businesses with the chance to make an impact in South Dakota. Because of this, successful applicants provide a high level of strategy and planning.

“These aren’t just your bar-napkin ideas,” Owen said. “We’re looking to grow the economy and to grow the state’s gross domestic product. We want to create jobs for South Dakotans.”

Another differentiating factor in the competition is its range of entrants. Owen emphasizes that Giant Vision is open to businesses of all categories, not just science and technology.

“I think we’re in a period of time where when people think of startups, they automatically think high-tech or electronic, and while that is where a lot of it’s going, this competition invites an entire array of people who think they can make a go,” Owen said.

He offers the example of a daycare that ended up winning second place in one of the competition’s first years.

“I remember walking around at first, and thinking, ‘What are we doing with a daycare?’, but as I stepped back, it was clear that somebody launching a shoe store, a new franchise, or a daycare is just as entrepreneurial as those in the biotech sector,” he said.

According to Boyd, a majority of the state’s new jobs are created by small businesses and entrepreneurs who are willing to take a chance.

How does the competition work?

In order to be eligible for the business competition, applicants must be South Dakota residents with a new business idea or start-up presence in the state. If the business is already in existence, it must have been in operation for no more than three years, with annual sales revenue of less than $500,000. Eligibility requirements are the same for students, with the added stipulation of being enrolled in at least twelve credit hours at a South Dakota college, university, or technical school.

The application process is the same for both businesses and students. Applicants must submit a business plan no longer than 10 pages, and fill out an online application.

“If the applicant doesn’t have a business plan yet, we encourage them to start with an executive summary,” Boyd said. “If you can’t even identify what your business will be, you may need to work on that idea a little more.”

Once the application is submitted, Giant Vision’s team of judges will review the business plans and select a group of qualifiers. Qualifiers will be invited to the competition in April, where they will exhibit their business idea at a booth, give a formal presentation to the judges, and record an elevator pitch. Qualifiers will also have the opportunity to interact with business leaders and investors during a luncheon. 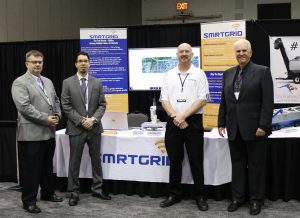 The 2018 winners of the Business competition, SMRTGrid, at their exhibition booth.

The Giant Vision competition will be held in conjunction with the Governor’s Office of Economic Development’s annual conference, giving qualifiers even more opportunities to network with area business leaders.