The sixteenth annual Innovation Expo drew a crowd of over 250 people to Sioux Falls’ Orpheum Theater on October 10.

Hosted by the Enterprise Institute, Startup Sioux Falls, and the Zeal Center for Entrepreneurship, the expo featured seven speakers, both local and national, as well as a student pitch competition.

With the tagline, “Where suits and shirts connect,” the expo aimed to bring together entrepreneurs, business leaders, and investors to make valuable connections and inspire creative growth strategies.

He emphasized knowing what you want to achieve before you go into business for yourself.

“If you don’t establish what you’re trying to achieve early on, it’s hard to change it later,” Smale said.

Smale was followed by Furst, who offered a primer on her company, Annie Capital, and its specific investing preferences (early-stage, majority women-owned, North or South Dakota-based, and high growth potential).

She discussed their revenue-based financing strategy and emphasized the importance of founder engagement.

Chamberlain, whose company, Walk Wise, was previously funded by Falls Angel Fund and recently joined the Minneapolis TechStars accelerator program, shared the story of building his product and reframing the walker as a tool for independence.

He encouraged the crowd to invest in problems worth solving.

“Invest in things that are ugly. Expect failures, and expect pivots,” Chamberlain said.

After Chamberlain’s talk, Weelborg welcomed students to the stage for the pitch competition.

The pitch competition is a contest open to all South Dakota-based higher education students. Five finalists or teams presented their pitches at the expo, and the audience texted in their votes to choose first, second, and third place.

Cortney Bickley and Abby Wollschlager received first place and $350.00 for their idea, SafeRun, a device to alert the authorities or emergency contacts if an individual finds themselves in a dangerous situation while running. Alessandra Dominguez received second place and $250.00 for her idea, Duo, a washing machine and dryer combination. Riley Johnson received third place and $150.00 for his concept, shortstop.news, which would assemble news based on topic, rather than source.

“Luecke was selected for his contributions to technology transfer programs at state universities, his involvement with South Dakota Innovation Partners, and the success of his current startup company, Prairie Aquatech,” Paulson said.

After a coffee and networking break, Walling took the stage to highlight alternative funding, followed by Weisser, who discussed his journey of taking over his father’s business. The final speaker, Idnani, gave an overview of her company and the challenge of raising awareness for body focused repetitive disorders. 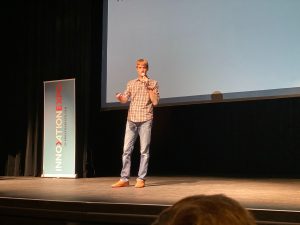 During the closing panel discussion, Furst, Weisser, Idnani, and Weber offered varying perspectives on approaching investors. Audience members were able to pose their own questions, and they received responses from both perspectives—Furst, Weisser, and Weber as investors, and Idnani as a founder with experience securing funding.

The event closed with a happy hour where attendees had the opportunity to introduce themselves to speakers or network with local business leaders and investors.